Judging from the length of time I have been saving a small amount of farro (3-4 years), I have been meaning to make this soup for a long time.  This morning I opened the storage jar and took a sniff to see if the grains were still good.  The nose registered in the “musty-fragrant” zone, so I rinsed then off, put them in a bowl, and soaked them all day.

By late afternoon they looked cleaned and refreshed, so I made up my soup:

Using my 4-quart Emile Henry stockpot, I added 3 Tbs. of olive oil and began the successive layers of sautéeing.  Beginning with the onions and doing each vegetable until lightly cooked, I finished the layers with the farro and spinach and covered the pot for 10 minutes to steam the leaves.

Removing the top, I stirred the vegetables to ensure they were not sticking, added some salt and pepper, then put in about a quart of water.  I covered the pot partially, and kept it on a medium simmer fro 15-20 minutes.  This may seem like a long time, but the farro absorbs the liquid slowly and the vegetables stay nice and firm if not cooking too fast.

Final stage: turn the heat down to a very low simmer, cook uncovered, adding a cup or two of water if needed.  Cook for another 15-20 minutes.  Taste for texture and seasonings.  Cover and remove from heat for another 15 minutes, while flavors mingle.

Serve in a pasta bowl.  If desired (and I did), chop up a Calabrian hot cherry pepper, and add to the soup.  Open a bottle of 2009 Guidobono Roero Arneis, a full-bodied Piedmont white wine, and enjoy! 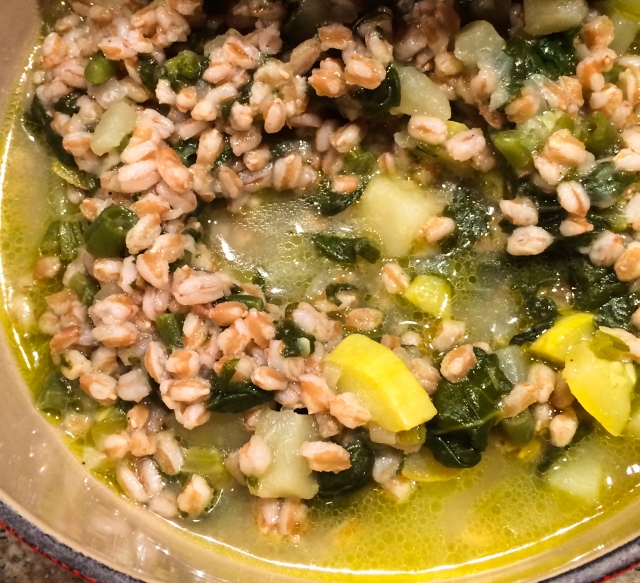 The more astute followers of my blog will have noticed that the pot in which the soup is shown in the pictures is NOT the Emile Henry stockpot, but rather a small Le Creuset enameled cast iron pot.   Here’s the story: I wanted to use a smaller pot originally, but I decided to cook in the Emile Henry larger one because I did not think it would all fit well.  That turned out to be correct, so after serving my dinner, I put the leftovers in the small pot and into the refrigerator.