The title could describe me tonight, or my dinner, or both.  My day started this morning inauspiciously, when I had to stop for the three traffic lights less than 1/4 mile apart, near my house — the only ones for 7 miles as I headed eastward.  Worst of all, there was no traffic on the cross streets, so it was a complete waste of time.  However, after that, everything went very well.  The drive to the city (just after rush hour) was fine, I managed to do my errand at the Apple store, then had a meeting with my teaching colleague and our two teaching assistants, to review and finalize the grades for 65 students in our class.  After lunch I met with a graduate student from another school — at his workplace — to provide some coaching on his major project for a Master’s thesis.  All the professional stuff went well.

At 4:20 PM I started the drive home.  It was awful  I haven’t seen so many cars on every road in every possible direction in a long time  What should have been a 50-minute trip took two hours because of the traffic.  En route home I picked up supper for Barbara as she had asked — an appetizer and Pad Thai from a local restaurant — so she could depart shortly after 7:00 for choir practice.  I was so tired and cranky by then, I poured myself a fresh glass of red wine and sat with her during her meal, but I had no desire to eat then — Thai food or anything else.

A couple of hours later I was ready to cook, and even though in some ways it was a repeat of recent meals, it was one of the most satisfying dinners in months — and was made mostly with roasted vegetables.  There were essentially four elements:

Not fancy, but full of flavors, easy eating and perfectly suited to the rich French Banyuls wine I had started to drink.  Furthermore, since I was cooking just for me, I was unrestrained by the limits that I need to respect when cooking for Barbara, too.

I started roasting with the oven preheated to 425º F, then dropped it down to 400º after 15 minutes, because it was cooking a bit too fast.  The root vegetables (radishes, turnips, carrot and a Peruvian sweet onion) were enhanced a bit with the addition of one leftover steamed beet, to which I added a touch of smoked Spanish olive oil (new ingredient, intriguing flavor) and one of my other indulgences — an obscure finishing salt.  This particular salt is Kala Namak, a coarse black volcanic salt mined in Darjeeling, India, and sold by The Meadow.  I know, that sounds truly strange, but I chose it when in their NYC shop two years ago, based on tasting samples of a variety of their gourmet sea salts.  What is so astonishing about this one is the strong sulfur taste, and the fact that I find it so appealing with many foods.  It does not hurt either that it is particularly low in sodium content.

While the root vegetables were caramelizing, I used another shelf on the oven to roast eggplant cut in cubes and one large Portobello cut in thick slices.  These were all treated with the other holy trinity — olive oil, salt and pepper — and cooked until richly flavored. When the eggplant was done, I added more olive oil, Italian dried oregano, and the leftover sauce Barbara had made on the day after Thanksgiving for her roasted vegetable dish with red onion and butternut squash.

As I looked at the plates of finished vegetables, I realized I needed protein.  Fortunately, yesterday I had baked two loaves of whole grain bread (including Einkorn this time), and Barbara had made hummus, so the protein sources were on hand quickly. 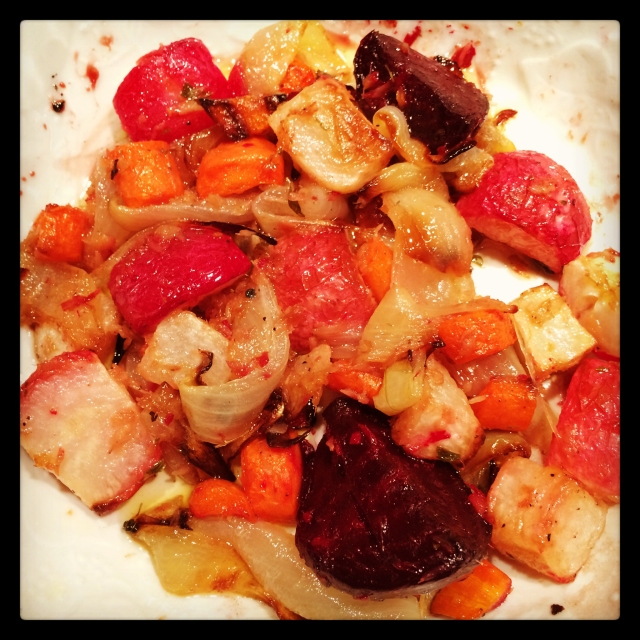 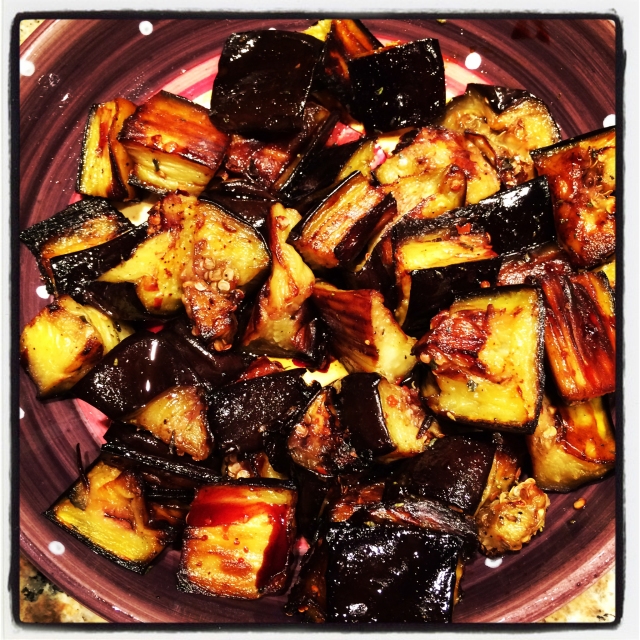 I had two helpings of everything.  The wine was a 2008 Grenache, Mourvedre, Carignan, Syrah blend — Domaine du Traginer, Cuvée d’Octobre.  This is the higher end version of the wine from the same producer which I so enjoyed two months earlier.  It comes from the southwest of France, near the border with Catalunya, and has the best qualities of each region.  My friends at Social Wines had saved a few more bottles for me.

Under the circumstances of these culinary delights, the traffic problems of that afternoon quickly faded into oblivion.