A Little Bit of Fish…

…is OK in small quantities and not very often.  At least that’s my working hypothesis two and a half years into our mostly-vegan way of eating.  Tonight’s dinner featured 3 or 4 oz. pieces of striped bass for each of us, braised in the way I learned from Tom Colicchio’s book, Think Like a Chef, years ago.  A couple of days ago I bought the filet at Chris’ fish market, so tonight I was ready.  I let Barbara add the salt and pepper to the fish, so she had no way to complain about my seasoning.

I sautéed the fish with a little olive oil in a non-stick skillet, skin side down, long enough to crisp up the skin and cook the darker meat on that side — maybe 3-4 minutes.  After removing the fish to a plate (and wiping out the used oil), I added about one and a quarter cups of orange juice, mixed with 2 tsp. of red wine vinegar, to the pan on medium high heat.  To the juice I added a clove of garlic, cut in half, and a small handful of lemon thyme from the garden.

Then I placed the fish back in the pan — ensuring that the liquid was no higher than half the thickness of the filet.  Turning the heat to moderate, I partially covered the pan so that the fish braised in its own juices with the orange juice mixing in.  As the pan juices evaporated, the orange sauce intensified, and when the liquid was almost all gone, I had a rich glaze on the bass.

And yes, those are mushrooms!  Good observation.  You will remember the Mushroom Consommé in my previous post.  Well, Barbara and I adored it, so I made it again this morning and served some as a first course in porcelain espresso cups.  This time I have a photo to share with you. 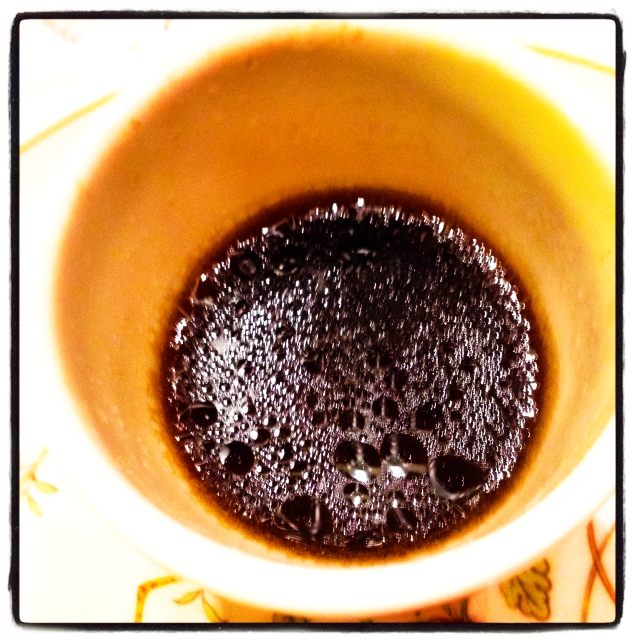 Anyway, there were lots of richly-cooked mushrooms which were available after straining them out for the broth, so it was natural to plop them on top of the fish for even more flavor.  They went very well with the orange sauce (which was not sweet, because there was only the natural sweetness of the juice — balanced with the wine vinegar) — nothing more added.

Vegetable sides were easy.  We had a small cabbage that needed cooking, so I sliced it thinly and added it to a pan with some lightly caramelized onions.  That was sautéed until it had browned a bit, then I added pieces of carrot (mostly for color) which were first poached quickly in the water I was preparing for boiling Yukon Gold potatoes.  When the potatoes were tender, I pressed them in the potato ricer, added olive oil, a small amount of rice milk, salt and pepper — and two secret ingredients — crispy garlic slices, and sautéed bits of leeks.  These two items had been leftover several days earlier from some other preparations, and I was delighted to be able to use them AND to spruce up the mashed potatoes at the same time.

Finally, the wine.  Last week I had been to Lower Falls Wine Co. for a brief tasting with the wine maker from Bernard Moreau et Fils in Chassagne Monrachet, and I was quite taken with one of the premier crus.  I had opened the 2011 Morgeot on Friday, and it was still lovely with this meal — the kind of luscious white Burgundy that gives Chardonnay its good name. 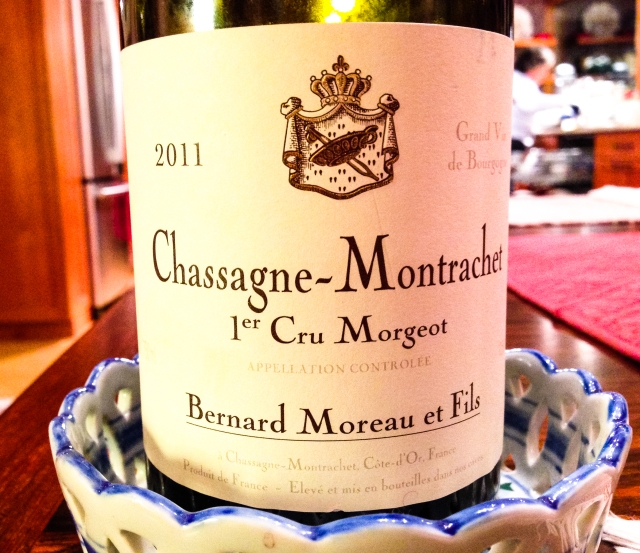 1 Response to A Little Bit of Fish…