Dinner at My Apartment

We interrupt our regular programming with this brief announcement: I can still cook!  It’s been more than 10 days since I was left to my own devices in the kitchen, and I was eager to try again.  Tonight provided a good opportunity.

I’m staying a lovely small apartment in the Testaccio section of Rome.  This morning I took a three-hour tour of the area with Katie Parla as my guide, starting with the old market which is a block and a half from our front door.  I specifically searched for bieta (sort of a Roman chard) and the beautiful, tender Roman artichokes, which are nearing the end of their season.  I found both, in excellent condition.  Sicilian eggplants, Romanesco varietal zucchini, bananas for my breakfasts, and some tomatoes rounded out my larder.

Oh, yes, the tomatoes.  As brother Johnny would say, I didn’t say that accurately: it should be s-o-m-e tomatoes.  I watched in the market as Katie carried on a seven-minute conversation with the vendor in her best Italian, as he quizzed us on what I was going to prepare and how I would cook the dish before he would render his considered judgement on which of 8-10 varieties he would suggest for the meal.  We settled on Pachino tomatoes from Sicily:

This photo is not re-touched.  They really are the color shown, perhaps a little darker.  So I gathered a few of my Puglia food purchases (orechiette from Bari, dried oregano from Monopoli,  olive oil from Ostuni, and went to work in the kitchen at about 7 PM.  An hour and a half later,  feasted on the pasta with a thick eggplant-tomato sauce, a plate of  verdure — braised artichokes, steamed bieta, braised zucchini — a couple of pieces of a farro whole grain bread from Volpetti —  toasted crisp — and (using Katie’s sommelier expertise) a local Lazio from a nearby store, a red wine, Tufaliccio 2010 from Marco Carpineti.  Altogether, it was very gratifying — tutti bene.

Of course, anyone who has seen me cook, knows about the downside of this adventure: the kitchen is a disaster.  But I will clean up.  Eventually. 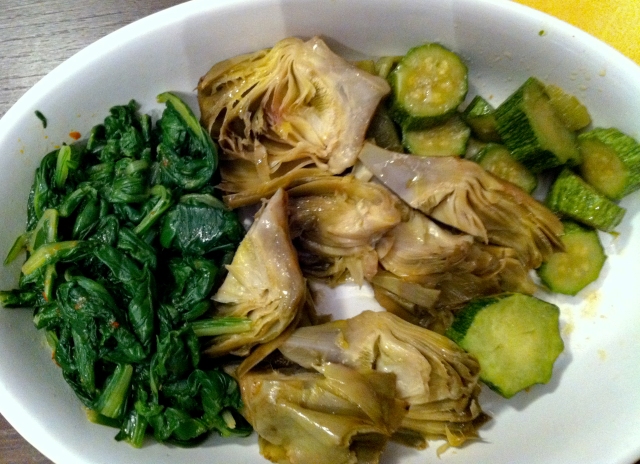 This entry was posted in Food, Travels, Vegan, Wine. Bookmark the permalink.

1 Response to Dinner at My Apartment