I have so much to tell you!  I’ve been away from blogging for six weeks, but not from cooking.  In fact, in addition to the teaching work, this has been a very productive period in our kitchen.  Among the most exciting developments:

First, the breads.  Having progressed through the Tartine book from artisan white (70% white bread flour, 30% whole wheat), to true whole wheat (70/30 the other way), I decided to try the rye bread version.  I ground some rye berries in my new grain mill (photo below), and made a dough with 70% white bread flour, 20% rye, and 10% home-ground whole wheat.  Since I was so tentative, it was a half-recipe, i.e. one loaf.

It was a very sticky, very difficult dough, taking approximately forever to develop, so I stuck it in the refrigerator (actually on the screened-in porch when it was 42 degrees that night).  The next day it was more manageable.  It took some extra time the next day to rise sufficiently (and to bake out), but the results were superb.  I was amazed at the well-developed crumb structure and the slightly sour rye flavor.  Since we couldn’t eat it all in a few days after baking, I made melba toast (thinly-sliced by machine) with the remainder, so it would last a bit longer.

Another expedition was an attempt to create some of my favorite savory tastes from my omnivorous days only six months ago.  For example, I remember vividly sautéing pancetta with onions as a base for some of my pasta sauces, and a bit further back in time, using some thinly-sliced Shanghai ham to add richness and umami to a dish with baby bok choy.  How does one do similar things in vegan cooking?

The opportunity to address that dilemma presented itself one day this fall when I had some very fresh Swiss Chard from the local Hmong gardeners in Lancaster, MA.  As usual, I stripped away the leaves for cooking, and was left with the chard stems.  Normally, they are not worth keeping, but these were so fresh and crunchy, that I had to try.  I remembered Mike Anthony (Chef at Gramercy Tavern) and his pickling expertise from cooking in Japan, so I pickled the ribs.  The next day they were ready to use.

I cut them into a very fine dice, then diced up some young beets, as well, and cooked them in a bok choy stir fry that exceeded my high expectations.

I have subsequently used a small amount to spruce up some pasta sauces the same way.  Next on the list was fresh raw vegetables, inspired by the bounty at the farmer’s markets late this Fall.  A simple Japanese-made julienne tool made it especially easy to shred a single carrot, a bit of daikon, a small zucchine.  I also used a small, hand-held, ceramic bladed thin slicer for fine pieces of red onion, red pepper or cucumber, and proceeded to place those items on almost everything for a few weeks.  When combined with my whole wheat raisin currant bread and some Fastachi pistachio nut butter, along with home grown leafy sprouts, the results were delicious.

And of course, every morning, my smoothies were gratifying — all the more so with the addition of a single Peppadew Pepper from South Africa and some home-brewed Rejuvelac, from home-sprouted rye berries. 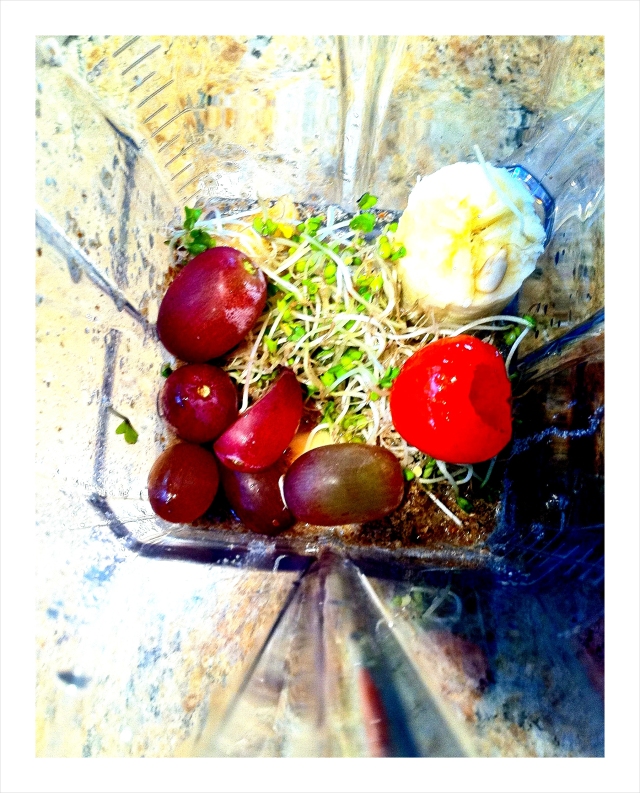 Tonight I was in the mood for a hearty stew (it IS late November in New England, after all).  So I put together a seitan stew which I’ve been contemplating for awhile, and it turned out just fine.  Recipe is below; sorry — no pictures, we were too hungry.

This entry was posted in Food, Vegan. Bookmark the permalink.