April has been a good month (for food and wine, anyway), and it’s only half over.  Here is a sprinkling of highlights.

Nick Mucci and his brother, James, import some superb natural Italian wines from small, artisan producers.  I’ve been a fan of their wines since Eileen introduced me to them several years ago.   Two weeks ago they held a special event to celebrate their 5th anniversary of the business, by hosting six of their winemakers at a special dinner at Loyal Nine Restaurant in Cambridge, MA.

I was delighted that my good friend, fishmonger, and great foodie, Chris Basile could join me there.  Together we visited the tables of each winemaker, sampled the wines and the small plates the restaurant made for each, and had a marvelous time. 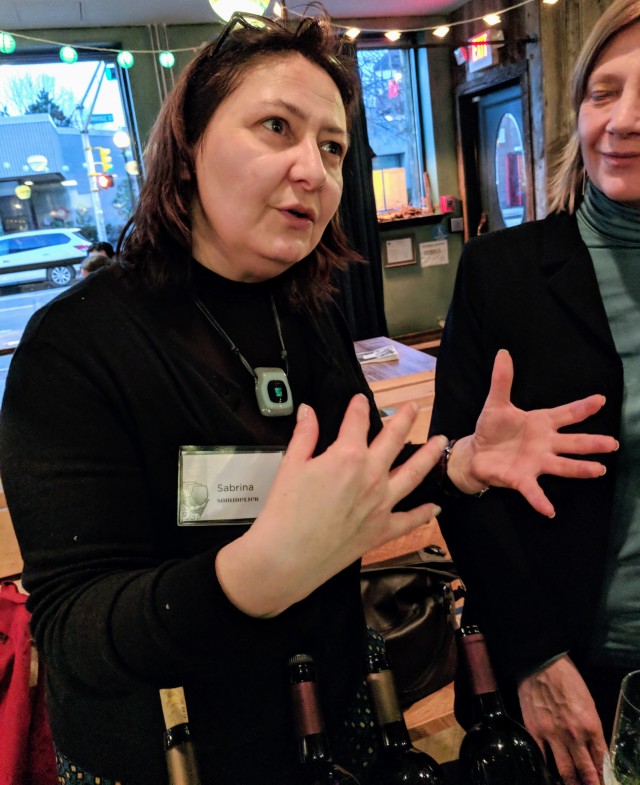 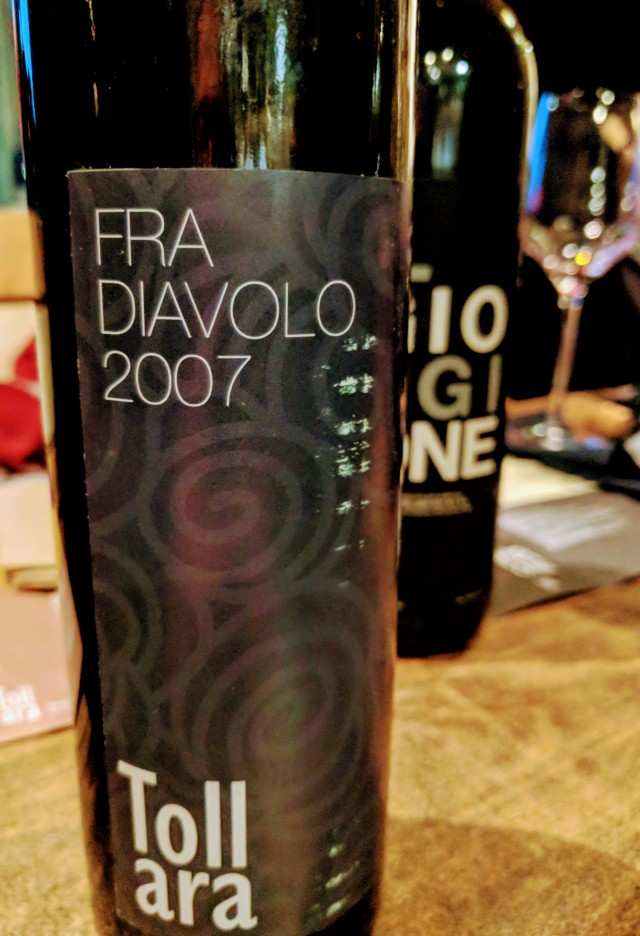 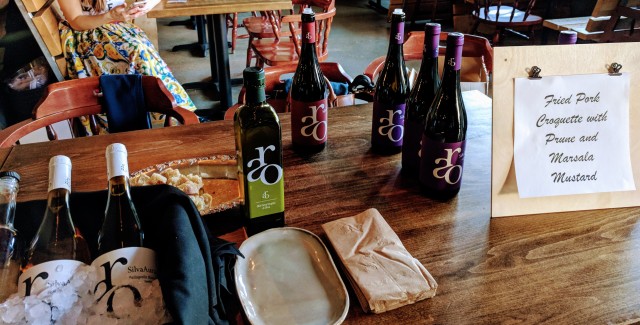 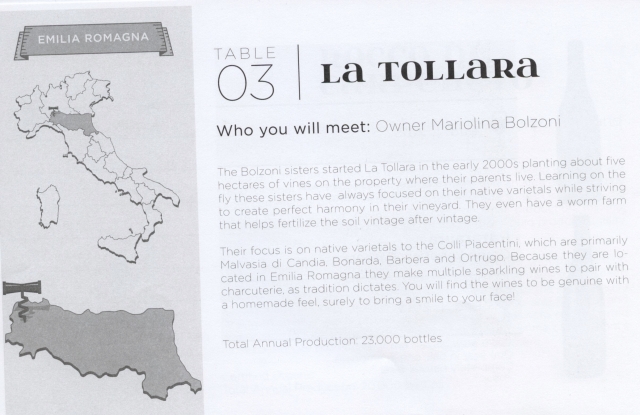 I had previously purchased wines from Rao (Silva Nigra – Pallagrello Nero grapes) and from La Sabbiona (VIP – Famoso grapes), and I enjoyed then again here.  But the most exciting grower was La Tollara, whose Malvasia di Candia Aromatica was truly captivating.  They also had some excellent wines from Bonarda grapes, as shown in the photos above. 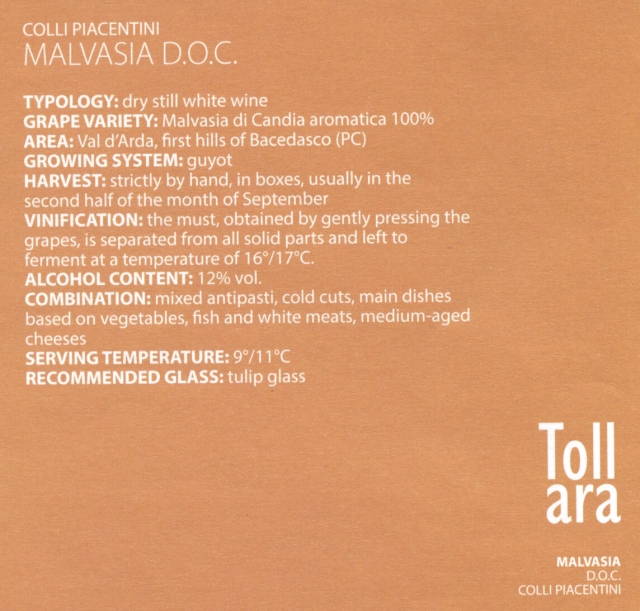 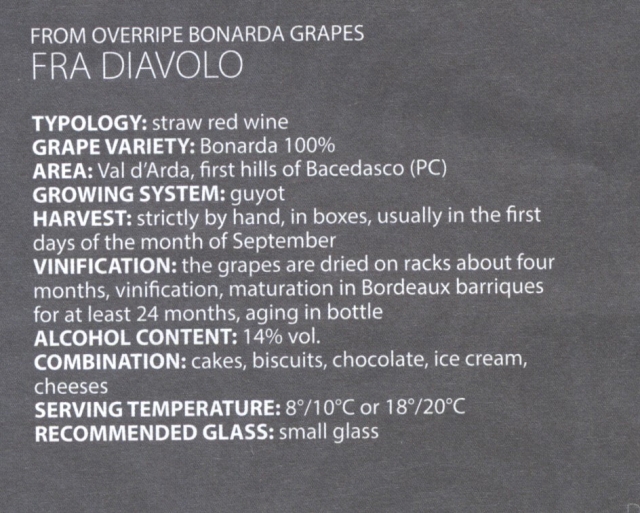 I came away more impressed than ever with Mucci Wines — which was the purpose of the event, I imagine.

The previous week I went to a wine tasting with Sandy Block at Legal Sea Food, featuring Under the Radar (unusual) grapes, which was informative as always.  After the tasting, I went to Eataly Boston to buy a few items and to try their restaurant Terra.  Sitting at the bar, I had a great view of the wood grill station.

I wasn’t that hungry, so I had just two dishes: a grilled artichoke appetizer, and a squid ink pasta with smoked mussels.  The artichoke dish was top-notch.

For punctuation in this post, I am inserting Barbara’s collection of small, porcelain bunnies, which populate our greenhouse for some odd reason.

Next on the April food timeline was dinner with our daughter at Great Road Kitchen in Littleton on Saturday, just prior to a concert in Groton.  Restaurants don’t usually stir me to hyperbole, but they served a fresh (never frozen), line-caught Chilean Sea Bass dish with crabmeat and asparagus, and purportedly a lobster corn sauce that was wonderful.  It was accompanied by a delicious California Pinot Noir-based rosé that was delicious.

At Home over the Weekend

Today being Monday (Patriots Day in New England), we had a three-day weekend.  Even better, Barbara was busy with activities for two of the days, so I had plenty of opportunities to cook.  I had found two packages of Padron peppers at Russo’s last week, so I fried up a pan every day all weekend.  Served with terrific Swedish sea salt from Lynn and Dave’s visit to Sweden last summer, it was a perfect first course to almost any meal. 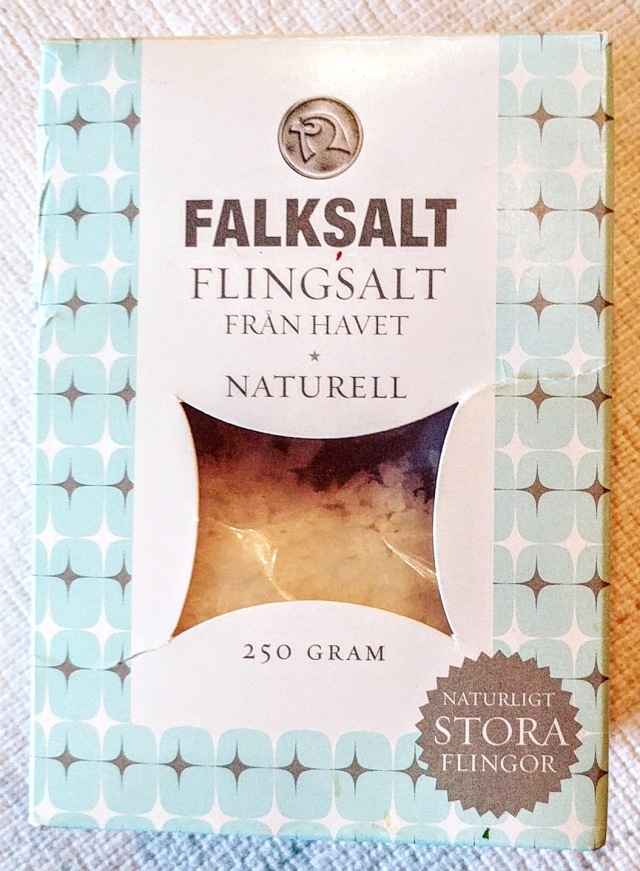 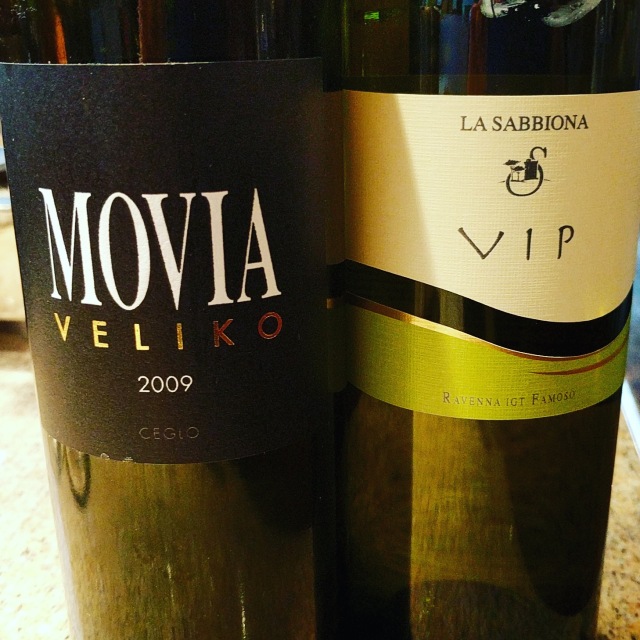 Whatever white wine was open in the fridge went well with the peppers.

For lunch yesterday I went cuckoo, making a chopped salad with a variety of ingredients left over in the fridge.

It was so good, I ate three plates full and loved every morsel, especially on my favorite Cafe Paris plate.

Today was for bread baking.  We had used all our frozen breads, so it was an ideal time to bake more.  And it was a cold, rainy, icy day, so what better way to spend the time?

Yesterday was dedicated to developing the doughs —  one for a Rye Levain with Caraway Seeds, the other for an Olive-Walnut Levain — two loaves of each.  The whole process is 27 hours long, mostly waiting patiently for the 1/2 tsp. of yeast and 100 gm. of my bread starter to do their magic with each batch of flour.

Here is the result:

This entry was posted in Food, Friends, Uncategorized, Wine. Bookmark the permalink.