If this is your first visit to my blog, you may wish to look at the previous post, since this one is a continuation of my food and wine explorations of Santorini.

One of the simpler meals I had one evening in Ammoudi was at Taverna Katina, to satisfy my occasional hankering for grilled seafood.  I ordered grilled vegetables (eggplant, peppers and tomatoes) and a very small plate of grilled octopus.  The grill man oversees a charcoal fire in a built-in fireplace at the restaurant, and he does a fine job.  A glass of Argyros house red completed the meal. 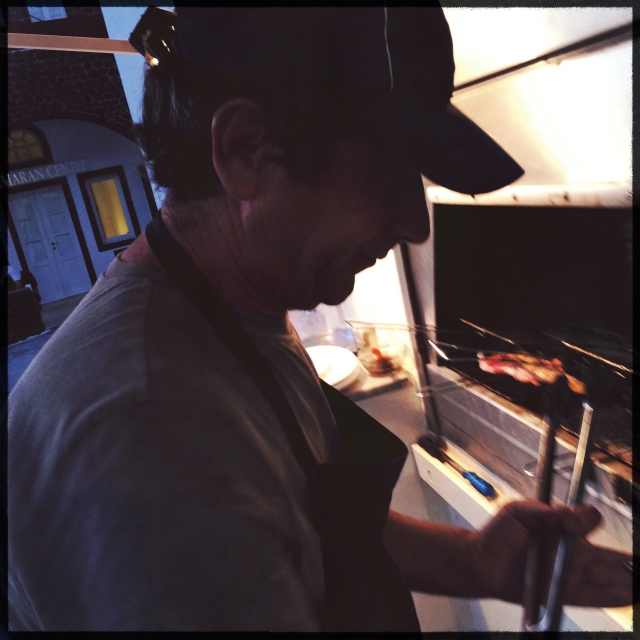 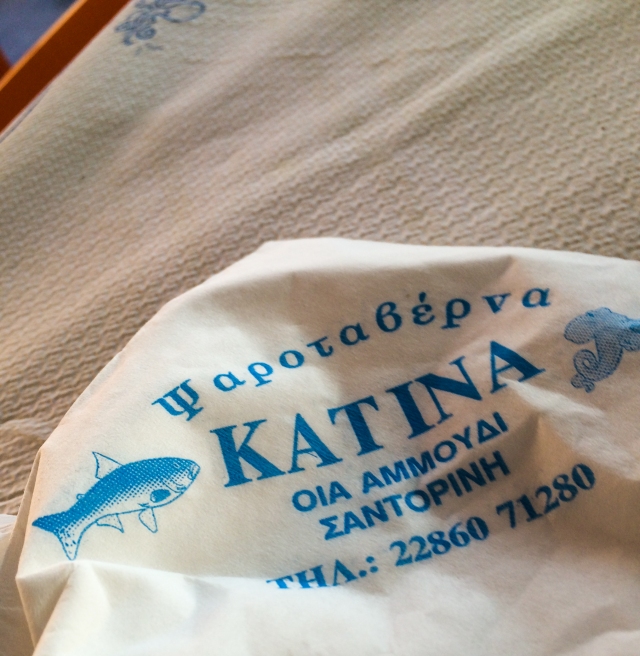 During my pre-trip planning I came across some write-ups on one fine restaurant on the island which received nearly unanimous acclaim — Restaurant Selene in Pyrgos.  If you are interested in foods, I encourage you to read a bit about the establishment and its owner.  There is a fine restaurant open only for dinner, and a small meze & wine area, for which I made a reservation before I left the US.  I’m happy to say that the restaurant lived up to its reputation.

I sat outside on the partially shaded deck and relished each course.  First, they served a little amuse bouche — Turkish tapioca, infused with tomatoes, delicious with or without a slice of semolina bread.  Next was an island specialty — tomato fritters.  The chef’s take on this was to deep fry the fritters and serve on homemade mini pita bread with fava sauce.  Another dish was lemon scented fava with fried squid, followed by tomato rice with sautéed wild fennel greens.  A glass of the Argyros Estate Asyrtiko was my choice for the first few dishes, and the Argyros Atlantis red for the tomato rice plate.  For the finale, I wanted to try the local pistachios.  However, these were not available on their own, so I had the Baklava made with pistachios to satisfy that need.  Altogether, a divine meal. 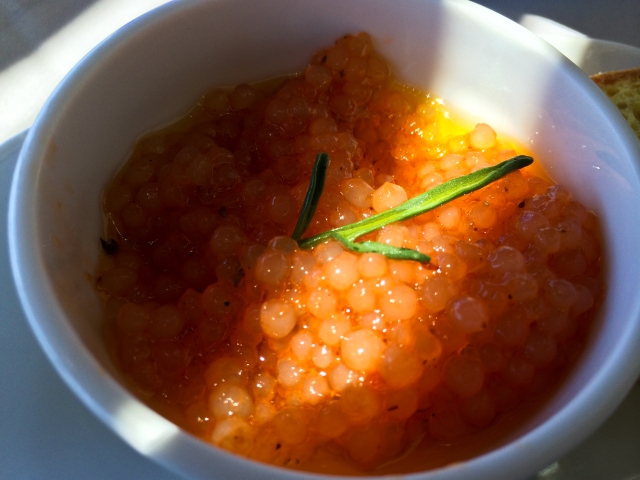 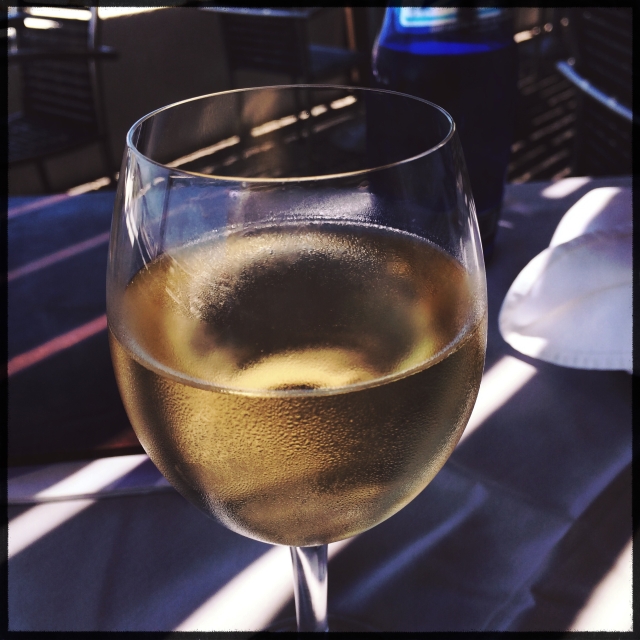 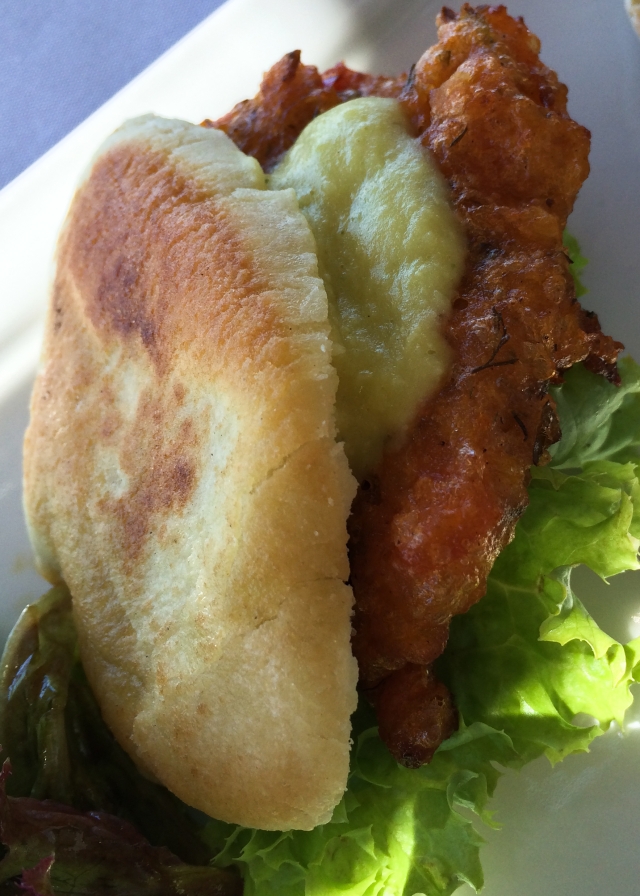 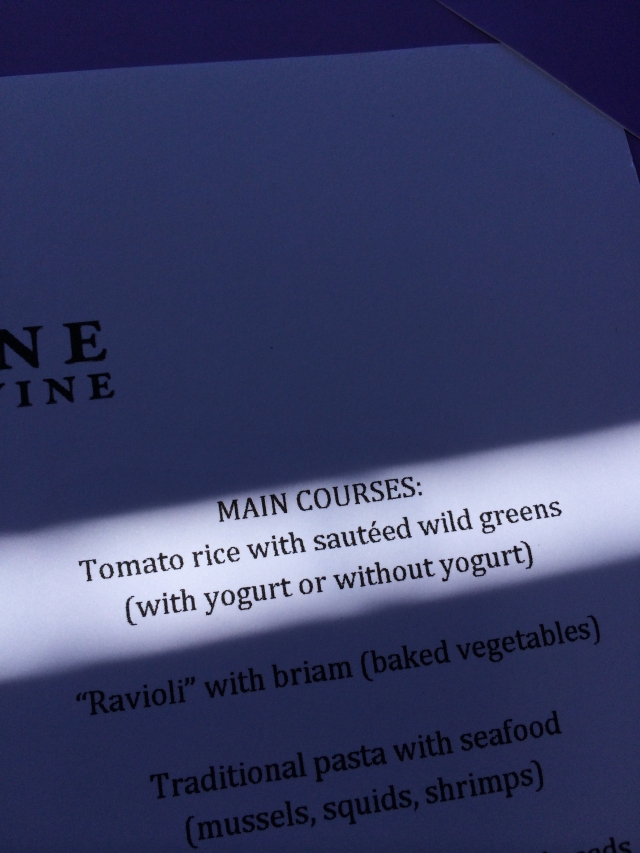 Last Meal on the Island

As fine as all this dining was, it lacked one element: dinner companions.  Furthermore, I had yet to find a way to taste Sunset Taverna’s signature dish, Lobster Spaghetti.  While I was willing to depart my vegan path for a small amount of lobster and this dish, it was available only as a meal for two people, and the lobster was priced at 90 €s per kilo.  I’m extravagant at times, but all that waste was impossible to me.

Both of these problems were solved on my last evening.  Nicoletta stopped by for a short visit to say good-bye and to make sure I was happy with the apartment, after which she was going to dinner at Sunset with Dominique, a friend of hers.  She invited me to join them for a glass of wine, which I was pleased to do.  Our conversation was lively in both English and French, and since they were ordering lobster spaghetti and asked if I would stay for dinner, the deal was sealed.  A first course of seafood salad was quite good, and the piéce de resistance was as tasty as it was dramatic in appearance.  It was a fitting end to a vacation for which I am running out of superlatives. 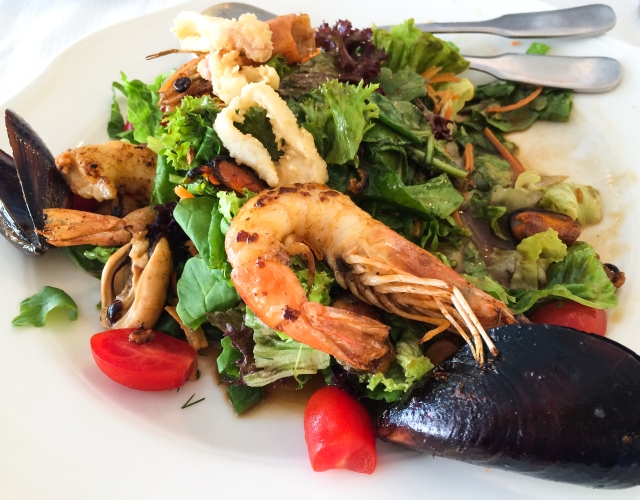 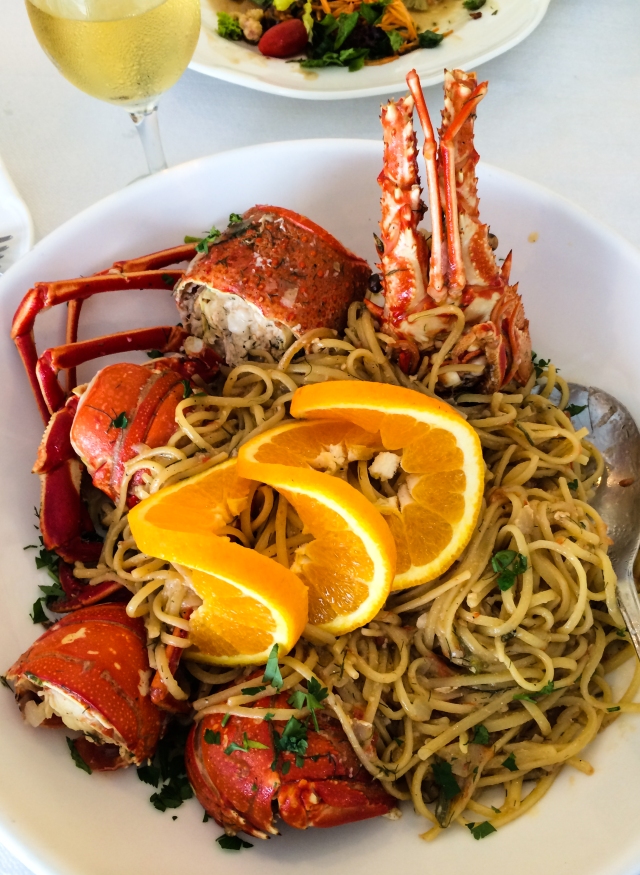 This entry was posted in Almost-Vegan, Food, Travels, Wine and tagged Santorini. Bookmark the permalink.