One sure sign that Springtime has arrived in New England is the emergence of our pizza oven from the icy grip of Winter’s snowdrifts. 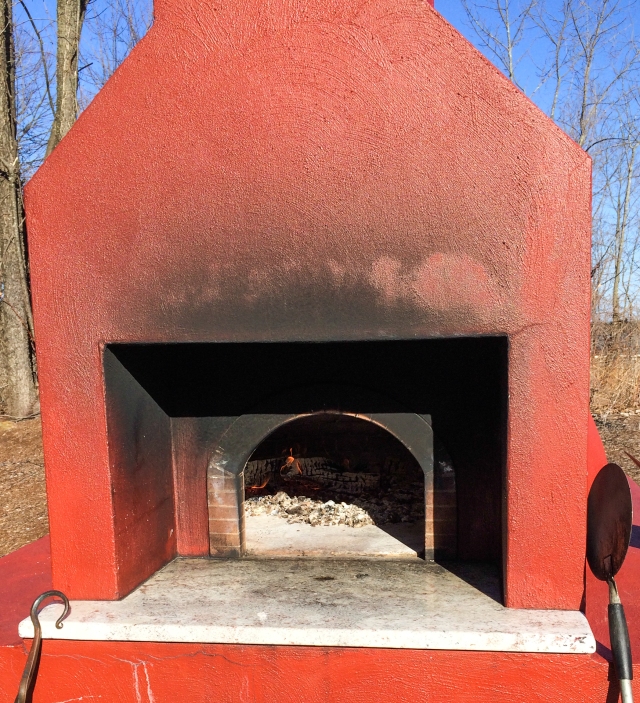 Today was sunny weather and warmish for this time of year: mid to upper 50’s F.  And so it was a perfect time to shovel out the old ashes and crank up the pizza oven for just the two of us.  One dough recipes makes enough for four or five pizzas.  We each made and ate one, then made and froze three others for future consumption.

I actually started the fire in the oven at about 12:30, knowing Barbara needed dinner well before 6 PM.  Normally, it takes 2 hours for the oven to get up to temperature (900+º).  However, today it took significantly longer, probably because we had such a long, cold and wet winter.  I believe that those conditions cause the first fire of the season to put much of its early BTUs into evaporating the moisture in the oven (as opposed to heating the wood and then the firebrick).  Anyway, by 3:15 PM I was ready to start cooking.

Usually, when we do pizza, we are cooking for 4 to 8 people, and we offer an array of 8-10 toppings plus homemade tomato sauce.  Today, it was just the two of us, and we proceeded with “simple” as our mantra.  Sauce was a jar of Dave’s Heirloom Tomato Sauce, supplemented by part of a can of our usual Lavalle organic Italian tomatoes.  Cheese: just mozzarella, already shredded and in the bag.  Toppings: sliced onion, zucchini, garlic slivers — with only the garlic needing any pre-cooking.  Last minute additions were slices of eggplant which I roasted in the pizza oven (only takes about 5 minutes), a couple of mini peppers which I had already prepared yesterday — oh, yes, and one experiment.  Late this week, in my craving for supplemental B-12, I bought a few littleneck clams at the fish market.  So in the short time before cooking the pizzas, I placed 5 of the clams in a small copper Bourgeat gratin dish, drizzled on a little olive oil, leftover Prosecco, two peeled garlic cloves, and ground black pepper.  The clams popped open in about three minutes, and the clam juice mixed with the wine and oil, to give me a flavorful shot of sweet and briny excitement, wherever I used it.  I ate the clams outside, as soon as they were cool enough to handle, and I tossed the empty shells into the brush, for really long-term composting.

Here are what some of the results looked like:

ready to go in 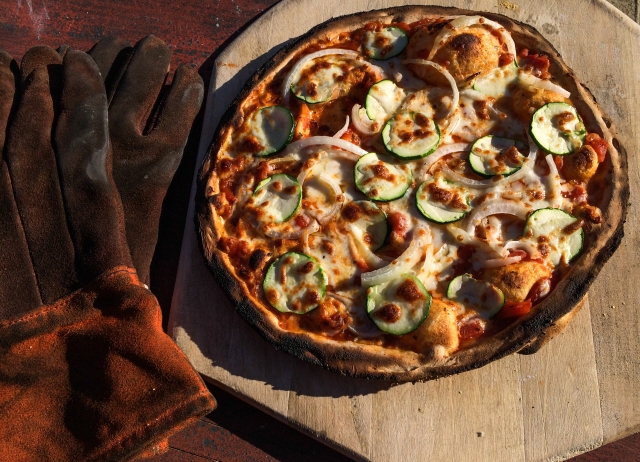 Barbara’s with zucchini and onion

The wine was one I opened the night before, a 2008 Primitivo from Guttarolo in Puglia.  It is the most luscious, balanced, elegantly fruity Primitivo I had ever had.