What do you think of when I say “roasted vegetables”?  I’ll bet it’s the usual suspects: eggplant, zucchini, red peppers, onions…all good choices, but a little prosaic at times.  Well, vegans and vegetarians have some marvelous other choices.  Tonight’s dinner —  a collaborative effort with Barbara — was an example.

After placing two sweet potatoes (or garnet yams) in a roasting pan, she put them in an oven preheated to 425° F.  She cut and roasted in the same oven 1-inch thick steaks cut from a fine head of cauliflower.  Separately, she sauteed onions, garlic and a can of Italian tomatoes in olives oil, then added some pitted, coarsely chopped Kalamata olives. Next step was to place the sauce on the reasonably tender steaks and roast that until the flavors concentrate.  Top with chopped chervil or Italian parsley.

In the meantime I did a very simple Roasted Napa Cabbage, after cranking the oven up to 450°.  Here’s what emerged from the oven: 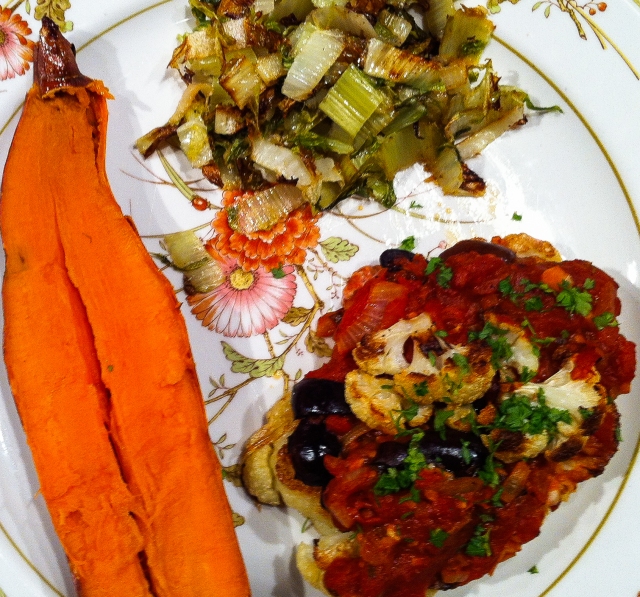 Excellent, but not quite done.  I had an appetite for salad as well, so I cut up a single Belgian endive, added some shredded lettuce and washed young organic arugula leaves, and then finished it with a vinaigrette (salt, pepper, Spanish sherry vinegar, Puglian olive oil and a few drops of cool water) and topped with shelled organic pistachios and my miracle ingredient of the night — sprouted rye berries.

Where the hell does one get sprouted rye berries?  Answer: one buys organic rye berries, soaks them overnight, drains them and then rinses them twice a day for 2 days, when they sprout.  Add water to the quart jar and let it all sit for two days, producing the fermented liquid, Rejuvelac, for your smoothie each morning.  After you drain the liquid for your drinks, the remaining sprouted, lightly-fermented rye berries are sweet, elusively-flavored and nutritious — and wicked good on your salad, especially with the crunch of pistachios.  If that’s too much trouble, go without the berries, no problem.  Buon apetito! 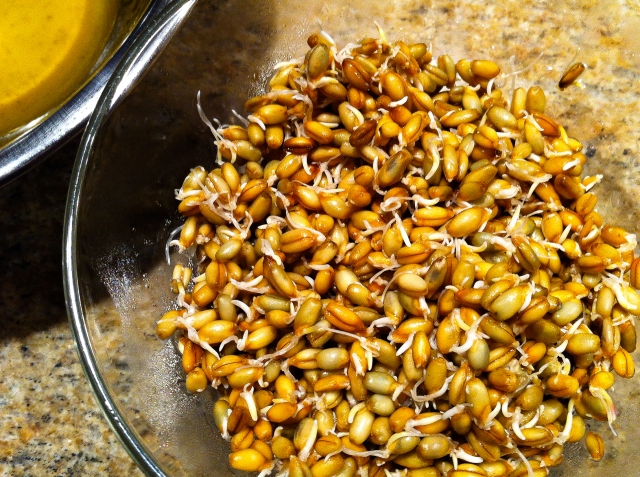